At the recent Oldboys Lunch at Guildford, Dennis Collett gave me a CD-Rom of photographs he took in Munich in 1972 (That’s 36 years ago!). Whilst the main section in Trips describes the area and machines, these other pictures bring back many memories to those who actually went there. Additionally I have just got to grips with Photoshop’s Web Gallery Automation, and so I have added a Munich Gallery and a Brisbane Gallery. I shall be going through the rest of the vast collection of photographs I have received and add more Galleries over the Winter. 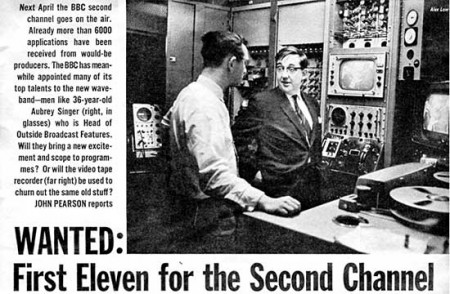 The picture on the right was sent to me by Bernie (Newnham) who has it posted on the Tech Ops site.
He asked us if we could identify the VT person on the left of the picture.
After an exchange of emails, Ron Bowman confesses to being that man! I quote:-

I cannot tell a lie – it’s me with hair! The occasion was the review of an early episode of Your Life in Their Hands. It looks like we are having a matey chat but he barely spoke to me. At a guess I’d say it was VT7.

Direct Television from Alexandra Palace is now as complete as it can be at the moment. Navigation should now work properly and we have managed to recover some more pictures. Do visit the Internet Archive which is a fascinating project and has enabled us to recover these valuable memories.

The Direct Television from Alexandra Palace web site that I mentioned below has now been relocated to its own domain. I managed to get www.bbctv-ap.co.uk which mimics fairly well its original home with Freeserve. I have tidied up the formatting and navigation and found a few of the missing pictures from our own archives. I have already received offers of more information and, possibly, some of the pictures that are missing. The link from here is as before in Links, but I have renamed it to Direct Television from Alexandra Palace. There are a lot of familiar names (and experiences) that VT Oldboys will recall.

Neil & I have spent the last couple of weeks sorting through Don Kershaw’s collection of books, manuals, memos, brochures and machine records. Don was always planning to write the definitive history of the department, but, sadly, never managed it. Mark you, seeing the vast amount of raw material he kept, it would have been a herculean task! Brochures marks the start of publishing this material and, today, while going through another box, we found this at the head of a list of machine acquisitions.

An innocuous document which recalls the fact that BBC week numbers did not match normal week numbers!!!

Obituaries section added to The Credits. As well as the Bryan Cowgill obituaries below, I have placed Neil’s appreciation of Don Kershaw and two old obituaries of Ian Macnaughton and Dennis Main Wilson.

Dave Rixon has found the missing page of his cartoon “Computer Catastrophes”. Afficianodos of Dave’s work can now see JV339 (John Vigar) utter the immortal phrase “Christ I’m screwed” (I have that in Russian somewhere!) and visit Chad’s Caravan Sales (sorry Chad). For those who haven’t looked at the cartoons, do so for they are not only funny but an inspired piece of social history (honest!).